In the Northern most area of China, just 300 miles from Russia, one city celebrates its freezing cold temperatures, in fact they practically show off. Crowds flock to see this unique Winter Wonderland. The only catch? Possibility of a wintery death?

After the bright lights of Christmas and New Year were put away and the engine driving my life spluttered back into the usual cruise, I felt I had lost the sense of adventure I left England with. So, I decided to take the trip I had promised myself since the day I arrived in China; a voyage to The Ice Festival of Harbin. So I packed my bags to the brim with scarves and thermal underwear and booked myself onto the three hour flight from Pu Dong. Like all great explorers I travelled alone, testing the cocktail of bitter, cold winds and loneliness on a man. My experiment only took seventeen minutes, the result- that I would rather like a warm room and some friends. The festival brings in millions of people each year, so neither were hard to find.

Many hostels are packed with expats, shared rooms costing around 60RMB a night. Getting to Harbin is not quite as reasonable, with flights costing upwards of 800RMB each way while the festival is running. The finishing stretch from the airport to the City Centre takes almost an hour but there are regular bus services (20RMB) running late and Taxis from the airport for 100RMB.

Although the main attraction for Harbin is the Ice and Snow World (冰雪大世界 bīngxuě dàshìjiè) fellow adventurers told me they much preferred the Sun Island International Snow Sculpture Art Fair (or 太阳岛国际雪雕艺术博览会 Tàiyángdǎo guójì xuědiāoyìshù bólǎnhuì) so on my first morning I set out to see that. I was pretty tired so I hopped in a cab. It’s not hard to find an honest man in DongBei, so if the driver tries to bargain a price beforehand just get another taxi. I was hustled out of 40RMB, the buses cost 1, on day two I just walked…

Get there I did, however, and after dropping a further 240RMB at the entrance I was expecting something good. The Sculptures are impressive, and massive, the whole park is full of them, each more intricate than the last. The final few are the awarded ones, pushing the limits of what water can do. Some sculptures take the form of mountains, carved with images and stories, walkways and tunnels. I still found them underwhelming though, if you’re strapped for cash and short on time, I wouldn’t call it unmissable.

As the sun went down, and the mercury went down with it; temperatures fall below the toasty -25C (-13F) daytime temperature, and everyone heads indoors. I didn’t find the temperature a problem, even after 9 hours outside in the cold. I did of course plan in advance; I wore thermals, with jeans and ski-salopettes, two t-shirts, a jumper, two scarves, two pairs of gloves, a Russian hat that covered my ears and a ski-jacket. I even had heat pads in my boots.

Problems, I wasn’t prepared for:
• The cold will kill your batteries! At these temperature they will only last 20% as long as normal. Cameras, phones, MP3’s everything needs to be rationed, not to mention protected, my camera formed a thin layer of ice and mobile-phone screens are known to crack.

Other attractions include the Siberian Tiger Preserve, a breath of icy-fresh air compared to the cruel conditions of most Chinese zoos. Visitors are put in cages, instead of the animals, a bus-shaped cage that will take you through the enclosures. There is also Saint-Sophia Cathedral, several night clubs and a third, smaller Ice Festival inside the City Centre. Just as expensive, definitely worth a miss.

The City of Harbin is fairly well developed, lots of expats live there as a cheap alternative to Beijing for studying standard Mandarin at the many Universities. The festival spirit spills out over the streets; parks and shopping districts are peppered with ice sculptures, lights and winter decorations. The City Centre is very manageable as a tourist, there isn’t much beyond the Cathedral and shops to see and do but it does balance out a trip that could feel Ice and Snow World-centric.¬

On day two it was all about the main event, Harbin’s 29th Annual Ice and Snow World, best viewed after 5PM when the Ice blocks are lit up. I arrived at 1PM so for about 4 hours I was on my own. I think it’s worth going early; the park is full of attractions like Bob-sleds, rubber-rings, ice slides, bikes on skis, all for no extra cost. By the time the sun goes down they are all dogged with half-hour lines, when you’re better off taking in the lights. The buildings themselves are incredible, walls, stairs, ceilings all made from crystal clear ice blocks, quarried from the SongHua River each year. They glow with fluorescent light capturing the imagination. The whole places is bigger than I expected, they even have a theatre with performing dancers and acrobats, the perfect place to escape the weather. There’s plenty of entertainment outside too, gangs of dancing Pandas roam the park, MC’s are on stage talking large crowds into doing the Conga and would you have guessed that the Harbin Beer Company have an Ice-Bar?

If the previous 28 annual Harbin Ice and Snow Worlds have taught Harbin nothing else, it’s how to throw a Harbin Ice and Snow World. Everything runs very smoothly, there are adequate W.C.s, cafés and Mongolian Yurts. They built a gentle-snow Buddha, an ancient Chinese story told in the medium of ice-sculpture, even a KFC. All of the activities really round out the Park making it a fantastic and memorable day out.

In total I spent seven hours at the park, most people blow through it in two hours, just taking in the buildings so it’s possible to experience everything Harbin has to offer in a day. I think it is worth a three day trip, if you have the time. However, with Beijing City, the Great Wall at Dandong, the North Korean border, Dalian City and the Rime Trees of Jilin I’m off to my next adventure!

"Temperatures fall below the toasty -25C (-13F) daytime temperature, and everyone heads indoors" 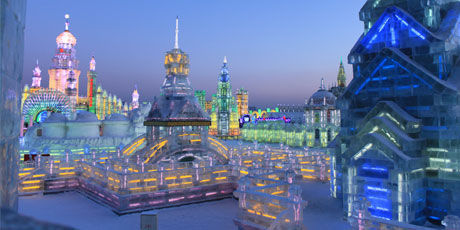 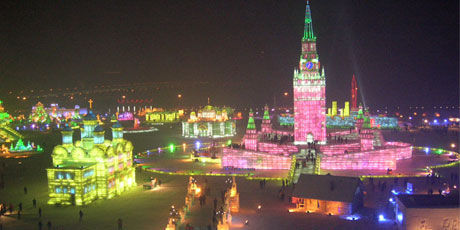