One of the great achievements of Chinese culture are the gardens. Anyone who has ever visited a real Chinese garden will be amazed at the variety of design features and the poetry in many details.

There are some rules that make a classical Chinese garden, but they are always reinterpreted and have evolved over the centuries.

The Chinese gardens were always much more then just a collection of plants, trees and landscapes. Originally a symbol of wealth, the gardens were developed in the philosophy between Tao and Qi and are now seen as an expression of deep poetry. In contrast to gardens in the Western world, the Chinese gardens are more private, fenced and quiet.

The traditional design of the gardens was always determined by the interplay and harmony between architecture and the environment. The creation of the gardens can be tracked back to two sources: ‘Yuanyou’ and ‘lingtai’. Yuanyou was a sort of hunting ground for Chinese emperors, each divided into natural and cultivated parts. There is often a ‘lingtai’ built on these places, which is a brick platform that should lead the emperor closer to heaven and the gods. 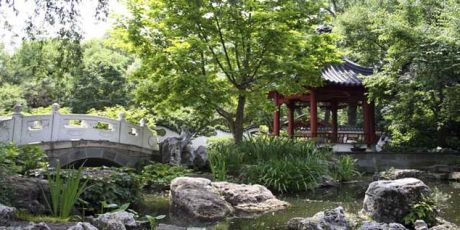 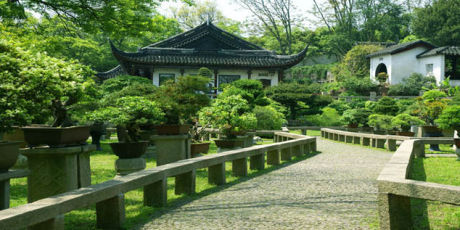 This basic pattern was always carefully developed. The rules were first written by the poet Bai Juyi (772-846) from the Yang Dynasty, and some of the rules are still the same:

A great achievement of China’s horticulture lies in bringing together many different ideas and styles from different sources. Bringing them together was a big challenge, however the result was gardens that were very harmonious, despite their wealth of design. Other key issues are:

Architecture:
Chinese gardens always include buildings. Whether there are large or small plants, usually between 20 and 30% of the area is covered with buildings. Important is the so-called Tingtang, originated from ting and tang. Ting means a place to discuss and tang a bright, sunny, great place. This is usually drawn very strictly, but sometimes a very richly decorated type can be placed in an exposed position first, preferably in the middle of an open surface. In front of that, a ‘xuan’ is placed, to create a kind of terrace in front of the building to enjoy the view of the rest of the garden. Another ‘Ting’ can be used as a resting place, and somehow is reminiscent of a classic Chinese pavillon. Another important element is ‘Langzi’, a kind of covered walkway that leads through the garden. Paths are generally an indispensable part of a garden in China.

Stones:
Designing with stones is another important element. Natural stones can be piled into small hills, walls, sculptured shaped areas or even small, isolated caves and valleys or bridges could be built. There are numerous possibilities.

Water:
Water is the soul of all gardens. Water reflects the sky, the trees, flowers and houses and leads to an illusion of a larger garden. It is the home of Lotus plants and fish and creates its own atmosphere with various sounds like flowing, splashing or dripping. Ponds, lakes, wells and small rivers are therefore essential. In small gardens, a waterfall is often found. With the sound and the cascade of falling water, the importance of water is increased even at a small scale.

Plants:
They represent the original nature with their life, vitality and growth. It could take years to assemble the plants into a big picture in terms of the builder. The colours and the flowers of the plants can also symbolise the seasons.

The Yuyuan Garden in Shanghai. Takes place in the northeastern part of the old city of Shanghai, built in the early 17th Century by late Ming Dynasty. This garden of 4,7 acres is famous for its many historic buildings, including the Sansui Hall. This building reaches a height of 14 meters and is built of thousands of yellow bricks from Wukang. The roofs and walls are richly decorated with ornaments. The view from the main building across the pond offers a view into this spectacular garden.

The Lingering Garden in Suzhou. Originally built by a minister of the Ming Dynasty. Was rebuilt during the reign of Emperor Jiaqing (1796-1820) and received a temporary name, the ‘cold green village’. Now renamed back to Lingering, because this name sounds like the first name of the Owner Liu in Chinese. Covering an area of 2 acres, all the details of a classical Chinese garden architecture can be seen here.

The Lion Grove Garden in Sozhou. Covers an area of 1,1 acres, originally built by Tianru, a prominent monk from the Yuan dynasty, around 650 years ago. Received its name from stone structures that look like crouching lions. It is also the home of the Pei family, the second largest land owners in Shanghai at the beginning of the last century. The rock garden with 9 winding paths and 21 caves reminds to a small maze. Emperor Qianlong of the Qing dynasty was so impressed about his garden that he planted two identical gardens in the Forbidden City in Beijing and at his summer house.

The Surging Waves (Canglang) Pavilion in South Suzhou. The Chinese word for garden has many different meanings, among other things also ‘Pavilion’. And in this garden, the importance of the pavilion shows very clearly. Originally built in the Song Dynasty, some changes and rebuilds took place over the centuries. Nevertheless, the garden is clearly one of the biggest attractions in this area and is one of the few gardens where you can explore all the areas on footpaths and marvel over 20 species of bamboo.

Beihai Park in Beijing. A distinctive example of an urban garden and probably unique because of its bright white Tibetan pagoda. The garden was considered by many emperors as a retreat by the river to escape the perceived tightness of the Forbidden City. Only the royal family of the Qing dynasty used the garden no more, preferring to take refuge from the summer heat in Beijing. With a size of 7 acres, Beihai Park is one of the biggest parks in Beijing and shows the idea of paradise of the Chinese by its many playful details.

Summer Palace in Beijing. Originally named the Qingyi garden an with a length of 20 kilometers probably the largest park in China. It was built within 15 years from 1751 and originally cost four million taels – a huge sum by today’s standards. A prime example of a garden design in a pristine landscape.

The Geyuan Garden in Yangzhou. A small garden of 0,6 acres, built in the early 19th century, showing the styles of North and South China. The name comes from Zhu, Chinese for bamboo. And bamboo is one of the main design elements in this garden. In addition, the garden is famous for the rock garden with beautifully arranged prospects. By the successful composition, a visit is highly recommended all year round.

Take your time when visiting a Chinese garden. Although an overall view of the whole garden seems very impressive – only the many seemingly small details that you discover during a tour show you what really represents a Chinese garden. Enjoy the moment at a water course or in a tea house overlooking the garden. The philosophy of Chinese gardens is that the so-called ‘seven things’ are designed to serve man. They are soil, stones, plants, sky, paths, water and buildings. And man, as the eight member, may find perfect harmony by and with the seven things.