‘…. And a sack of rice will burst in China….’ This phrase does not adequately reflect the importance of Rice in the Asia region. This food, in China called dàmǐ (大米), is not only a plant, but ‘daily bread’ for many people.

Rice is one of the oldest crops worldwide. Archaeological finds prove that 7000 years ago, first rice species have been domesticated in the Jangtse River area in China. And still the world’s largest growing areas are in China, India and in other parts of Southeast Asia. The spread to the rest of the world took place via Egypt; as early as 400 BC, rice was growing also in Mesopotamia (present-day border between Iraq and Iran). In the 10th Century, rice was introduced in Spain, and grown from 15thCentury in the Po Valley in Italy (still the largest rice producer in Europe), before it became known in the U.S. from the 17th Century on. Rice is traded on the stock markets, as many commodities; for example on the Rice Stock Market in Vercelli (Piedmont/Italy).

The rice plan belongs to the annual grass species. Originally, the plant was grown in dry soil. Trough breeding, it became the marsh plant, now grown to 80% of so-called wet-rice. Under ideal climatic conditions like in a hot, humid tropical climate, up to three crops per year are possible

"In some countries, rice accounts for about 4/5 from the whole meal" 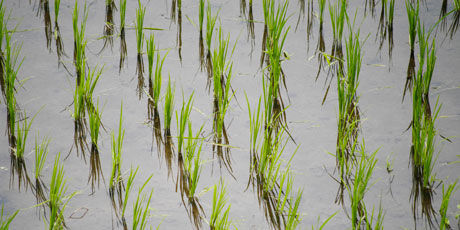 From each plant, 50 to 300 grains of rice can be harvested. The terraced fields in China and Thailand are characteristic. Rice is still mostly planted and harvested by hand in this regions. After sowing, the terraces are flooded to reach the flowering and drained before the harvest.

The variety of rice is enormous. Not only the growing areas are different for wet rice and dry rice, but also by the species. The most common varieties are now the long grain and short grain rice. There are many varieties: Arborio, Jasmine rice, Basmati rice, Brown rice, Sweet rice, Japanese rice, Green rice and many more. The different types are used for a variety of dishes. For example, Brown rice is not suitable for Risotto, Green rice is completely inappropriate for a course with Dry rice. The White rice is polished, which means the germs and the silver skin of the rice grain are removed. They are still present in Brown rice, here the rice is just threshed out of the case. This adds even more vitamins and fat, it requires more water during cooking and the cooking time is extended accordingly. A shorter cooking time results in parboiled rice. This rice has been soaked in hot water, steamed under pressure and then dried again. With this shorter cooking time, the rice is less sticky. In the term of aromatic rice, varieties like Basmati rice and Jasmine rice are known.

Wild rice (Brown rice)
The wild rice is strictly speaking not a type of rice. Although it is also a grass plant, but originally from North America and has not much in common with the rice species from Asia. Wild rice was very popular among the Indians of North America and led to some tribal fighting for the best growing areas. Above all, the tribe of Anishinawbe Indians were using Wild rice as staple food. His name was Manomin, which means roughly ‘treat gift from Manitou’. Besides the now familiar red Camargue rice, most Wild rice species are offered in conjunction with normal rice as a mixture.

Rice is a staple food – more than half of world’s population eats rice daily. In some countries, rice accounts for about 4/5 from the whole meal. So it is not surprising that in 2009 the world production was 678.7 millions tons. Almost 50% of which were harvested in China and India.

The importance of rice in China is also reflected in language use. For example, eat’ is equated with ‘rice’. Chinese eat on average twice as much rice as the Japanese.

Rice is used to 92% of the total harvest for food. In addition to rice as grains, it is also known as rice wine, rice vinegar, rice milk and rice beer. Further, there are also rice flour which is also used for cooking, or even rice paper.

The success of this plant is also in the nutritional value. With a carbohydrate content of 78.6 out of 100 grams, this small grain outstripped the nutritional value of pasta, potatoes and corn. However, important substances such as vitamin B1 were missing in early days. By new varieties, the content of vitamin B1 increased and is complemented by other minerals such as calcium, phosphorus, potassium, niacin and amino acids.

More than just a small grain

By the way – Rice is a symbol of fertility. So, if you want to become a godmother or godfather, don’t forget to throw a lot of rice on the bride and the groom at the next wedding! And if you are not able to eat all the rice at the Chinese restaurant, never put the chopsticks upright in the rice. This is a sign of mourning.

Just a quick note:  Rice should always be rinsed with cold water before cooking. In addition, rice should not be stirred while cooking, so it sticks less. This is in contrast to Italian risotto rice – if the rice is not constantly stirred, you will not be awarded with a creamy risotto (‘little rice’).  Or do as most people in Asia: Save the trouble and get an automatic rice cooker. Millions of people can not be wrong! And if you even drive a Japanese car, rice is closer to you as you may think: Honda is translated with ‘the main rice field’ and Toyota means nothing else than ‘rich rice field’.

And finally an old Chinese saying:

If you want to be happy for one hour, get drunk;

If you want to be happy for three days, get married,

If you want to have a happy life, eat rice every day.