If they had not felt the need to dig for water in a Chinese village in 1974, the secret of the terracotta army probably would never have been discovered and a historical sensation would have been kept from us.

Qin Shi Huang Di, the first emperor of China, was made king of the Qin State at the age of only 13 (246 B.C.).  Twenty-five years later (in 221 B.C.) he conquered six neighboring countries and united China for the first time in history. Shortly after his accession he began with the construction of his tomb, which would be protected by an army of life-sized clay soldiers in order to defend him after his death: the terracotta army. More than 700,000 forced laborers were exploited during the thirty-six years needed to construct the tomb and to produce more than 7,000 soldiers made for the terracotta army. Among the achievements of the famous and important emperor Qin Shi Huang Di were the standardization of the Chinese characters, and the standardization of the currency and measurement system. He also prompted agricultural reforms and started building defensive fortifications along the country’s northern border, known as the first Great Wall.

"Impressively, all the clay figures are life size, and each was designed and detailed with individual facial features." 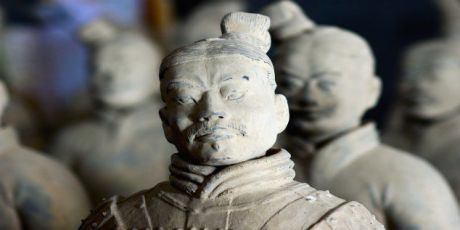 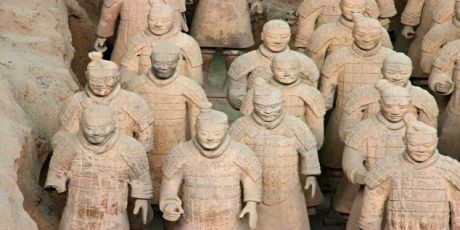 More than 2000 years would pass, however, before the terracotta warriors were discovered purely by chance. In March 1974, when Chinese farmers in Xiyang, near the ancient imperial city of Xi’an, decided to dig a well, they come upon a layer of hard clay. They found arms and legs made of clay and bronze arrowheads. Upon further examination of the life-size finds by archaeologists, it was recognized that the findings dated to the Qin dynasty and were extremely valuable. After additional excavations, it turned out that there were thousands of life-size warriors and horses made of clay and that they belonged to the funerary monument of the emperor Qin Shi Huang Di. The grave mound itself is still intact. Chinese archaeologists will open it once the previously excavated material has been fully investigated.

The tomb complex is situated in Lingtong, near Xi’an in Shaanxi Province. The emperor had chosen this site for his tomb because it was close to rich deposits of gold and jade. The whole complex occupies an area of 56 square kilometers and has been on the the UNESCO World Heritage list since 1987. Historical records show that the emperor had transport convoys available with fifty-four wagons. Today, it is assumed that in the vicinity of the grave, a whole convoy of eighty-one wagons might be present underground. Thus, the excavation of the emperor’s funerary temple remains a major task for the archaeologists. According to early sources, one can hope for unexpected finds here: in 100 B.C., the chronicle of the historian Sima Qian described that the funerary hall is a temple complex with untold treasures, as well as an underground replica of the world with lakes and rivers of flowing mercury!

The Terracotta Army dating to the Qin Dynasty consists of 7,278 life-size mounted and foot soldiers, as well as horses, chariots, and weapons. In addition, offerings in the form of deer antlers and animal bones were found, which were to promote a victory. Impressively, all the clay figures are life size, and each was designed and detailed with individual facial features. It remains unclear whether the figures were freely invented, or whether they were modeled after living soldiers of the period. Today’s scholars theorize that such an exact representation of the figures would only have been possible with real people at that time.

Studies have shown that most of the clay components were produced in an extensive casting process, with a high degree of craftsmanship, which clearly demonstrates the high technological level already achieved at that time. The pieces were put on sturdy legs, so they could be manufactured free-standing. Hollow heads, arms and legs from charred earth were set on the stable legs with plaster strips. After that, the basic model was covered with a fine layer of plaster and the face was scratched into the plaster mass. The armor of the warriors was made separately and added. After the figure was fired at a high temperature, in the last step it was treated with a chromium salt solution to protect it from degradation.

Development of the Research

The fact that the clay soldiers were already treated at that time with a chromium salt solution is a proof that this technique was already known in China 2000 years ago. Nevertheless, the fired clay figures gradually lost their original colour over time because the paint suffered badly under the damp earth. In 2004, German scientists developed a method by which the paint can be preserved for at least another 100 years.

In addition, the bronze wagon teams found at the grave provide valuable material for further art historical research. Because until now only a quarter of the funerary complex has been excavated, the Chinese archaeologists are working to excavate the remaining terracotta soldiers and restore them. In a few years, when the exact site is located, the tomb mound will be opened. The historian Sima Qian described the grave hall as a replica world made of mercury, bronze, and other precious materials. Studies have indeed shown a high concentration of mercury in this area and so the archaeologists believe that they will find the grave of the Emperor soon.

The Terracotta Army from the tomb of Emperor Qin Shi Huang DI, discovered in 1974 near Xi’an, is now considered one of the most significant archaeological excavations and cultural discoveries of the twentieth century. In contrast to the tomb of the Emperor, the Terracotta Army was not mentioned in any historical record for over 2000 years. Thus, this unique discovery was a sensational find even for scholars.