Warning: count(): Parameter must be an array or an object that implements Countable in /kunden/445808_200001/webseiten/wp-content/themes/mandalingua/header.php on line 24
0
Skip to main content

The biggest structure in the history of humankind; the big wall; the long wall; the 10.00 Li long wall or the unimaginably long wall. One should not, however, be under any illusion of an end-to-end connectivity of the wall that spreads from the Yellow Sea right into the deserts of Central Asia. In fact, there are – since the beginning of the building of the wall – several different sections that are partially connected and that have been built, extended and modified at different times during a time span of ca. 2300 years.

Length of the Wall

According to an official measurement of the Chinese government in 2009, the total length of the structure is 8.852 km. This measurement also includes 2.233 km of natural barriers like rivers and mountains, though. If we were to deduct these, we would arrive at a length of 6.619 km of the structures. However, even with this measurement, there was no unanimous agreement among China since the Chinese State Administration of Cultural Heritage stated a total length of 21.196 km in June 2012.

Construction and present condition of the wall

During springtime and the summer season in the olden days of China, invasions, robberies, and raids by nomadic equestrian people from the steppes of the North happened on a regular basis. Because these could not be defeated by classic military campaigns, fortifications and walls were built at certain strategic points. Since the Mongols and other equestrian people were very mobile, the walls grew and became longer and stronger in order to make it as hard for the riders as possible. But also, the several Chinese kingdoms built walls against each other, which explains the branching of the Great Wall of China, as well as the fact that it is not connected at some points. The Great Wall not only served the purpose as a bulwark against barbarians from the North but also as a travels, news- and transportation route. On horseback or on foot, travelers, dealers, and messengers were much faster on their way on the Wall rather than on the old land routes that led through many mountainous and unsafe regions of China.

Some imagine about the Chinese Wall 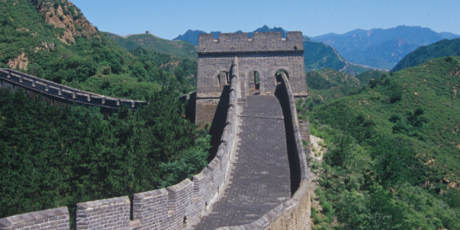 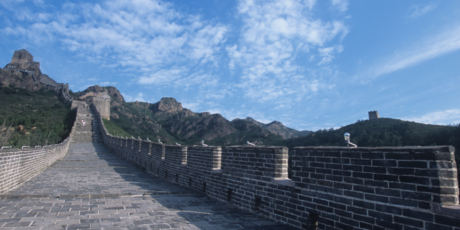 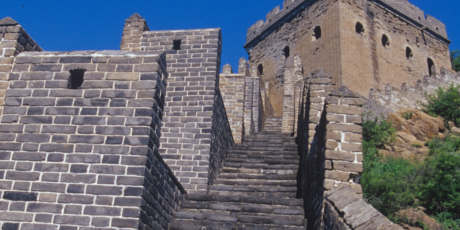 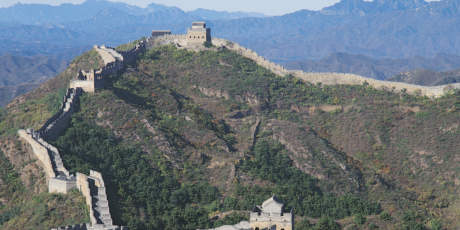 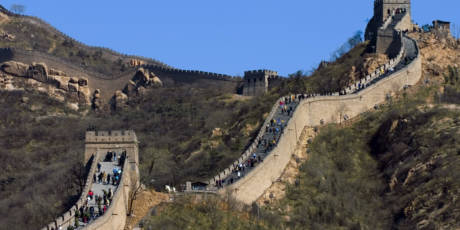 16 of the 66 dynasties were, directly or indirectly, involved in the construction of the Great Wall of China. Today, the main wall still consists of the several construction sections of the Ming dynasty (1368 – 1644). In the early period of the Ming dynasty, the government moved from its old capital city Nanjing to Peking in the North of China. During this time, the emperor Zhudi attached great importance to the reconstruction of the Great Wall as one of the most important defense projects against the Northern invaders. The condition of the Wall varies, the Ming-section alone is only 8% intact, while already 74% are in a bad condition. Oftentimes, only archaeologists can make out fundaments. This is especially true for sections of the Wall that have been constructed prior to the Ming dynasty. The construction method of the Ming period was expensive but of high quality. It is estimated, that 3 % of the rice harvest was used for the production of an, especially durable mortar. Also, the Wall consists of high-quality fired bricks that have survived very well over time. Because almost only these sections of the Wall are in a considerable good condition, our present-day picture of the Great Wall of China is shaped by the architectural style of the Ming dynasty.

The maintenance of the remaining sections of the Wall is financed by the state, whereby a large portion of this investment flows into a 600 km long section in Peking that is thus in a good to very good condition. It has no be noted, however, that some areas have been restored in such a way that one can no longer speak of an original. Because of lacking financial investments and a change in thinking that has occurred in many regions, more and more private initiatives are emerging. Villages that are located near the Wall unofficially take on sponsorships for sections of the Wall in order to prevent its deterioration.

Famous sections of the Wall

The best-known sections that are confined to tourists are Badaling and Mutianyu which are visited by around 10 million people a year. A visit during any of the different Chinese holidays should be avoided because you would have to share the experience of the sections with many other people. Badaling is well connected with the city’s public transport network so that one can reach the district by several buses or a train within an hour coming from Peking. Of course, you can get there faster and more comfortably via taxi or a driver who can take you the two sections within a good hour, who waits there and who can take you back to Peking again. The price for this is between 400 and 700 RMB. On-site, you can decide if you want to drive to the Wall with one of the cableways or if you want to go there by foot.

This area is the oldest section of the Wall confined to tourists; it was opened to the public in 1957 after an extensive renovation work. This section was completed in 1505 during the Ming dynasty; it is located around 70 km in the Northwest of Peking and is visited by millions of people in a year. This brought an economic upswing to the region from which it still benefits today. This section of the wall spreads over 1015 m mountain pass called Beibalou (北八楼Běi bā lóu). It is 7.8 meters high on average, but some sections of the Wall can be up to 15 meters high. The foundation is 6.5 meters wide and becomes narrower upwards to 5.8 meters width. The width at the top was developed so that either five horses or ten soldiers can march along its side by side. The entire Badaling section spreads over 12 km and is equipped with 43 watchtowers. 3.74 km as well as 19 watchtowers have been restored and are open for visitors. More than 370 foreign politicians and celebrities have already visited this section, including the former US presidents Nixon, Reagan, Carter and George W. Bush, as well as Queen Elizabeth II of Great Britain and much more.

This area is located 70km Northeast of Peking and offers a very well preserved section of the Wall from the Ming dynasty. Traces of a weir system (alt. fortifications) from as early as the sixth century, the time of the Qin dynasty, can be found here. Accordingly, this section of the Wall is actually older than the famous section of Badaling. The confined tourist area spreads over 2.2 km and is equipped with 22 watchtowers. In the middle of the construction, there are three watchtowers, located in a small valley; a big tower in the middle which functioned as a gatehouse, and two smaller towers at each side. Through an artificial terrace, all three towers are linked by a subterranean connection and because of that represents an architectural specialty. At the end of the last watchtower on the east side of this section, which is called the “Great Corner Tower”, you can see how Mother Nature is slowly recovering this old bulwark.

There are two lift systems as well as a summer toboggan run, nonetheless one can be very proud of oneself if one has managed to ascend and explore the Wall solely by foot and also walked to the bus station by foot, as one has then managed to walk over 10.000 steps.

The special architectural characteristics of the restored and non-restored sections of this area, as well as the location within a mountainous forested region, make Mutianyu a very special experience.

There are many more sections, like Simatai or Juyonggan, that are located within a 60 to 200 km radius in the North of Peking and that are open to the public. However, some of those are difficult to reach and a visit there requires some courage and a neck for adventures. Other sections and areas are still only a little developed for tourists so far.

For a long time, rumor had it that the Great Wall of China was the only man-made structure that is visible to the naked eye from space. Because the Wall is 6 m wide on average, this would mean that long streets should also be visible from space, which is not the case. The Wall is recognizable from a huge distance and large heights, but only when the sun is very low and the Wall casts a large shadow on the ground. Only through this naturally added “width” to the Wall it can still be seen.

The beginning or the end of the Great Wall of China: “Old Dragon’s Head”

Four kilometers to the South of the city Shanhaiguan in the province of Hebei, a very special section of the Wall can be visited, which spreads over 23 meters into the ocean and therefore looks like a drinking dragon. This is why this section of the Wall is called “Old Dragon’s Head” (老龙头Lǎo lóngtóu).

According to myth, the first emperor of China, Qin, was looking for an elixir of immortality which he suspected to be somewhere near the ocean. At this site, where the Wall had not yet been built, he encountered the magician Fu, who told him about three mountain-islands that were said to harbor the source of eternal life. The emperor ordered an expedition and several ships sailed to the East, but none of them returned. It is said that Fu and his followers were able to find the three islands, but not the source of eternal life. Because they were – supposedly – too afraid of the rage of the emperor, they decided it was best to turn their back on China; they settled on the islands which is how it is said Japan came into existence.

From 1644 onwards, during the new Qing dynasty, the Wall became less important and fell into oblivion. It either deteriorated or was used, with the permission of the government, as a quarry to build new houses from the old stones. None of the Europeans that visited China or Mongolia – among them Marco Polo, Giovanni da Pian del Carpine, William von Rubruck, Giovanni de Marignolli and Odoric von Pordenone – mentioned the Great Wall of China. It was only after the first and second Opium War and the enforced opening to foreign traders and visitors that the Great Wall of China became one of the main attractions for tourists. Travel reports of the late 19th century enhanced the reputation and the myth of the Great Wall in Europe and even in China, which brought forth a new consciousness of the significance of this gigantic structure. Nowadays, the national sentiment of the Chinese is inseparably linked to the Great Wall. Furthermore, to foreigners the Great Wall of China is the epitome of China and Chinese culture, which is why a Chinese proverb applies to both, Chinese and foreigners equally: “He who has never been to the Great Wall is not a true man” (不到长城非好汉Bù dào chángchéng fēi hǎohàn).