You are here:Home » China Guides » Cities and Hotspots in China » Harbin – The ice city

Harbin (哈尔滨 Hā’ěrbīn) is located within about 3,5 hours by plane from Shanghai, in the North Chinese province Heilongjiang, near Siberia. The rather “small” 3.8 million metropolis is worth traveling to especially during the winter because that is when the world-famous Ice-Festival takes place.

In 1898, the city was founded by the Russians in former Manchuria and rapidly developed into a commercial intersection because of its central location. Until this very day, the old city of Harbin bears witness to the Russian/tsarist architecture that, at a particular point or another, is reminiscent of St. Petersburg. After the Japanese occupation of 1932 until the liberation by the Soviet Army in 1945, the city, as well as Manchuria as a whole, was back under Chinese control. Until this day, the street signs are displayed in Latin, Chinese and Cyrillic characters.

The winters in Harbin are very cold, because an icy Siberian wind, coming from the Balalaikasea, is pushing through the city, causing a temperature drop of close to -40°. Many times, it starts snowing in October already and the frost will last until the end of April. The right winter clothing is mandatory in order to enjoy the cold climate, as well as the Ice-, Snow Sculpture- and Ice Lantern Festival, which are built up between December/January and February. Although it is a bit confusing: all three mentioned festivals stand on their own and are located in different places in Harbin.

The Harbin International Ice and Snow Sculpture Festival (哈尔滨国际冰雪节 Hā’ěrbīn Guójì Bīngxuě Jié) is the major attraction for most visitors. Buildings, slides, and artworks are created of ice. A visit is recommendable from 3 p.m. in the afternoon in order to be able to explore the area during daylight as well as at night. The sun sets around 4 p.m., from which point the whole area turns into a colorful feast for the eyes.

The Harbin Sun Island International Snow Sculpture Art Expo (太阳岛公园 Tàiyáng dǎo gōngyuán) is located on the same Island as the Ice and Snow Sculpture Festival, but different from the latter, the focus of this festival are giant snow-buildings as well as artworks made purely out of snow. With this particular festival, it is recommendable to pay a visit during the daytime, because the snow artworks glistening in the sun under a blue sky makes the visit even more worth it. Not far from here, a cableway takes passengers across the frozen river Songhua Jiang right to the city center.

The Ice Lantern Fair (冰灯游园会Bīngdēng yóuyuánhuì) is located in the city center of Harbin in the Zhaolin Park, which is not particularly large, but displays a variety of artworks made out of ice, fitted with a range of different light sources that can be admired here.

The Siberian Tiger Park (东北虎林园 Dōngběi hǔ lín yuán) is located in the Northern part of the city. With an area of 1.440.000 m², it is the largest nature park for wild Siberian tigers worldwide. Visitors who would like to see and experience something different will find this wildlife park very interesting. They can go on a safari tour to observe the tigers or they can do a tour by foot on trails, secured by grates, through the compound. What might seem quite odd for Western visitors is that they can also buy ducks, chickens, goats and even cows on the premises and, either by themselves or via a staff member of the park, feed them to the tigers.

The Stalin-Park (斯大林公園 Sīdàlín gōngyuán) stretches along the shore of the Songhua Jiang River on the side of the city center of Harbin. The park with the – for Westerners – unusual name, is an inviting destination to take a stroll, while life is humming on the frozen river. Visitors get offered dog or pony sledding; they can go ice skating or drive on the ice with various vehicles or just take a walk to the other side of the river, which is 950 m away. There is plenty of entertainment and activities for young and older people alike.

The cuisine of this region is called Northeastern-Cuisine (Dōngběi cài) and is known across China for its generous portions served at the table. It consists of various influences, even Russian, which is noticeable especially in the smoked savory red sausage (红肠 Hóng cháng). This sausage stands in complete opposition to other sausages in China, which are rather sweet and do not really delight the palate of European guests. No, this sausage is smoked and resembles the taste of the delicious polish sausage (“Krakauer”) or other European sausages. And this is not without reason: this sausage was first prepared in 1909 in a Russian butcher shop in Harbin by Lithuanian butchers and quickly became popular. Even today, it is still produced the same way by the Chinese.

In addition to the smoked savory sausage, visitors are recommended to try the following dishes:

The “twice-roasted-pork” in sweet and sour sauce (锅包肉 Guō Bāo Ròu) is a classic of this region and unfortunately often denigrated around the world as a “cliché dish” of the Chinese cuisine. But roasted pork here is an extraordinary dish, because the sweet and sour sauce is very delicately balanced and gets an extra kick by the addition of ginger.

Another dish worth mentioning is Dōngběi lā pí (東北拉皮). This is a cold-served dish made from thick, wide glass noodles with a vinegar-peanut-sesame-sauce and cucumber cuts. This is a very refreshing dish, which however demands a high mastery of using chopsticks, being that the noodles are very slippery. (für den Rest des Satzes fällt mir keine adequate Übersetzung ein)

In order to really enjoy Harbin during the winter, visitors need the right clothing. The most efficient way is to dress in layers, which creates air cushions between the individual layers and therefore helps to protect core body temperature. Long underwear, fleece jackets and trousers and windbreakers are often a good combination if one is in movement. Ad to that a scarf, a winter hat (I recommend a Russian Uschanka) and two pairs of winter gloves to be worn on top of each other. Special attention should be paid to footgear, because there is nothing more uncomfortable and unpleasant than cold feet. We selected Canadian winter boots for our travels, which are designed for temperatures down to -50°. The investment has paid off; even after many ours spent in the snow, we still had warm feet. 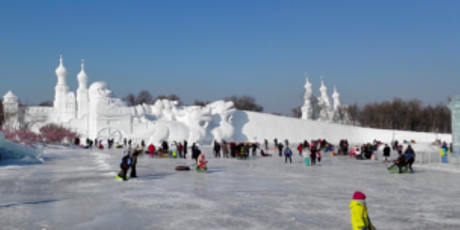 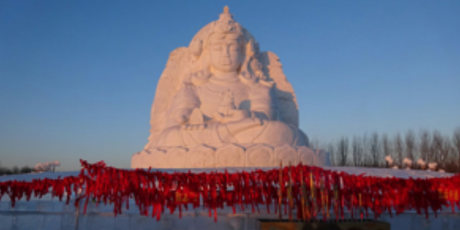 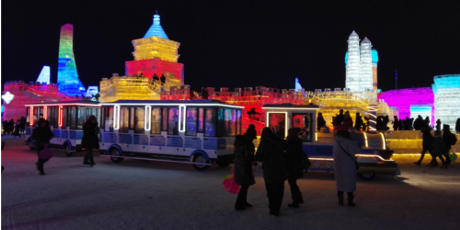 The Ice Festival by night 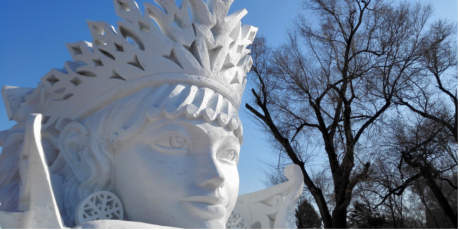