You are here:Home » China Guides » Cities and Hotspots in China » Xiamen – The door to the House

Xiamen is located within around seven hours via high-speed train in the South of Shanghai, in the province of Fujian, which already lies at the level of Taiwan. As a metropolis, Xiamen spreads across the mainland, which is also where the central station is located, but the heart of the city Xiamen lies on the eponymous island. The city is known for its pleasant mild climate, the clean air, as well as the Xiamen University, which is considered one of the best and most beautiful Universities in the country.

The island Gulangyu (鼓浪嶼 / 鼓浪屿, Gǔlàng Yǔ), located off the coast, is a one of the top attractions for visitors, one could say “a very precious pearl”. The island was occupied by many states after the Opium War, and numerous foreign concessions were founded, like Shanghai for example. Up to this day, most of the buildings on the island bear witness to the colonial past. The island lives mostly from and for day tourists, but visitors can also spend the night on the island. Cars are banned from the island and only a few electric cars are permitted. Once visitors move slightly from the main roads and tourism, they can enjoy the glorious peace and quiet, the magnificent landscape and impressive architecture. Besides its official name, Gulangyu is also called “Piano Island” (鋼琴之島 / 钢琴之岛), which is the name most Chinese people use because the island has the highest density of pianos per person in the whole of China.

The Hulishan Fortress ((胡里山炮台 Hú lǐshān pàotái) is a remarkable construction from the nineteenth century. It is a stylistic mixture of Chinese and European fortress design of that particular time period. With the help of a Prussian officer, the fortress was designed and built. Still today, one out of two Krupp cannon bears witness to the German-Chinese collaboration. This cannon is the biggest and oldest still existing weapon of that kind. Immerse yourself in a world long forgotten and enjoy a fantastic view over the bay.

Not far away from the fortress construction site, you can visit the Zengcuoan village (曾厝垵村 Céng cuò ǎn cūn), which is worth seeing. It is a former fishing village that seduces its visitors with small alleys, many different food stands, and contemplative accommodation facilities. But be advised that, at times, it can get pretty noisy and narrow. Especially when a lot of Chinese tourist groups are guided through the alleys at once, but a visit is highly recommendable nonetheless.

The Zhongshan pedestrian area (中山路步行街Zhōngshān lù bùxíngjiē) – which is located in the heart of Xiamen – invites visitors to go shopping or take a stroll. The street is lined with historical buildings in European architectural style.

The botanical garden (万石植物园 Wànshí Zhíwùyuán) is one of the most beautiful gardens in China and should not be left out when visiting Xiamen. 1,8 million trees and 4.000 species make this compound a paradise. Combine your visit to the botanical garden with a visit of the Wanshilian Temple (万石莲寺wàn shí lián sì). 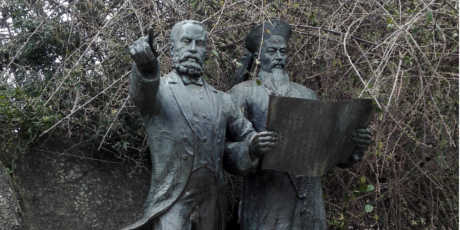 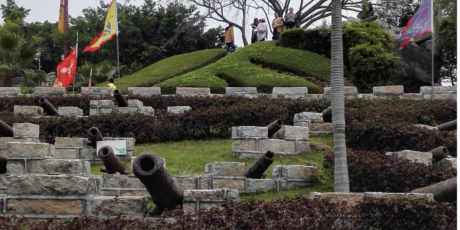 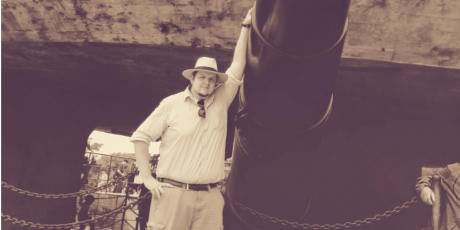 Man standing beside a cannon 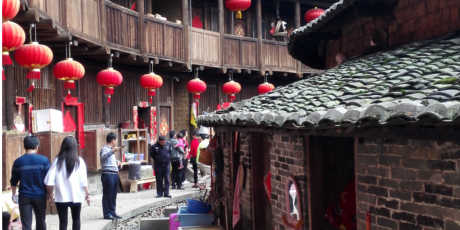 Interior of a Hakka house 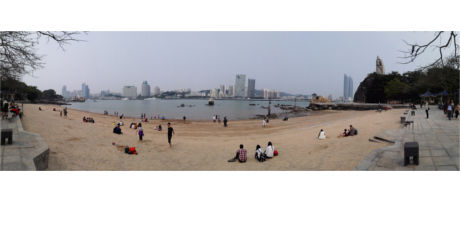 View to the Sea

Round house of the Hakka

The Xiamen cuisine is orientated towards the Fujian cuisine, which can be described as fresh, light, crispy and slightly hot. The chefs of this region are known for their sleight of hand with the Chinese kitchen knife. The cutting techniques are specifically adapted to the culinary experience. Especially important are soups and broths, as much time and devotion are put into them. In this region, a whole meal is only completed by a soup and it is said, that a meal without a soup is not to be accepted.

Visitors should defenitely thy the following dishes:

The name Xiamen translates as “Mansion Gate”, which refers to the important role the city has played for centuries as the gateway to China. Spend a long weekend here, enjoy the car-free island and let yourself be enchanted by the historical mixture of Western and Eastern culture.

The mainland is known throughout the whole country for its large Hakka settlements. The Hakka ethnic group (客家人 Kèjiā rén) belong to one of the eight Han-subgroups with their own language and cultural characteristics. They are said to have originated from Northern China, specifically around Lake Baikal in Siberia. From there, migration flows took place into Southern China and continued on towards Taiwan, Southeast Asia, North and Central America as well as Australia, which is why one can meet Hakka people almost everywhere.

The Hakka are especially known for their houses and/or villages which are reminiscent of bulwarks. They are divided into circular buildings called Tulou (圆楼 Yuánlóu), as well as square-shaped buildings (方楼 Fānglóu). The meter thick walls are made out of clay. The houses mostly have three to five stories and the largest Tulou can accommodate up to 800 people that belong to one clan. As defense constructions, they rarely have windows to the outside and just one main entrance. The rooms are designed like pieces of a cake around a large courtyard. From the outside, these buildings appear rather plain and simple, but on the inside, they are often decorated with artistic woodwork.

A day trip to this UNESCO world heritage should definitely be included.