You are here:Home » China Guides » Cities and Hotspots in China » Xian – The door to the Silk road

Xi’an (西安市) is the capital city of the Shaanxi (陝西省) province that is relatively centrally located in China. The name of this famous city means “Western Peace”. The 4.000.000 million metropolia gained worldwide recognition through the rediscovery of the famous Terracotta Army. This accidental find by a farmer is one of the largest burial structures in the world and is located around 36 kilometers Northeast of Xi’An. The ancient city was the first capital city of the Chinese Empire under the leadership of the Qin dynasty. But Xi’An is not only worth a visit because of the thousands of warriors; the city also marks the beginning of the legendary Silk Road, which has actually become more relevant today than ever before. Thus, Xi’an has become a melting pot of Chinese culture, but also of Muslim culture (e.g. the Uyghurs) and much more peoples of Central Asia.

The gigantic city wall of Xi’an (西安城墙 Xī‘ān chéngqiáng), with an extent of 13.6 kilometers, is the largest city wall in the whole of China. In the past, the wall had four large gates in every direction, which were opened by a signal of the Bell Tower in the morning and were closed in the evening through a signal of the Drum Tower. Both towers are the still well-preserved landmarks of the city. In more recent years, the wall has suffered quite some debris, but one can still take a walk along it and go round the old town of Xi’an. It is also possible to rent bikes on the wall so that a tour around the city doesn’t take hours. Be advised that bike salesmen only accept cash as a deposit, so you should carry enough with you.

With an age of over 1250 years, the Great Mosque in Xi’an (西安大清真寺 Xi’an Da Qingzhensi) is one of the oldest and also one of the most famous mosques in China. The Great Mosque is located in the predominantly Muslim part of the old town and is encircled by an oriental-looking Bazaar. It provides visitors with a place to rest and escape the hectic hustle of the city and a visit can be combined with a stroll through the Bazaar, where one can buy souvenirs. Bargaining is a must!

The Giant Wild Goose Pagoda (大雁塔 Dàyàn Tǎ) and Small Wild Goose Pagoda (小雁塔Xiǎoyàn Tǎ) envelop the visitor in an aura of traditional Buddhist time and atmosphere. Both towers are surrounded by large beautiful gardens and both can be visited. When the air is clear and clean, you can enjoy a marvelous view over Xi’an. The Giant Pagoda is 64 meters high and the Small Pagoda is 43 meters high. The latter used to be higher but because of an earthquake, the two top floors collapsed, shrinking the tower to its present day height.

The Muslim quarter of the old town is to both, the locals as well as tourists, a food paradise. When it gets cooler in the evening, you meet with friends and let yourself be enchanted by the oriental scents and dishes.

The following dishes should definitely be tasted: 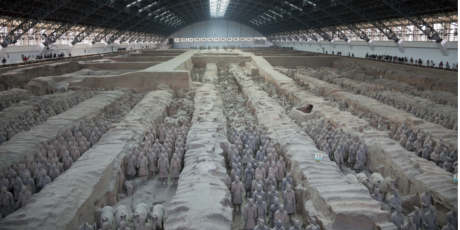 The Hall of Terra Cotta Army 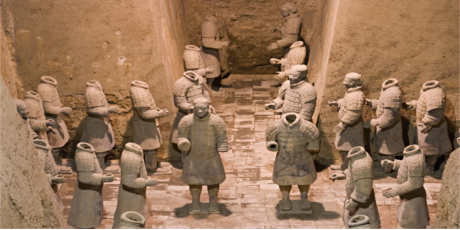 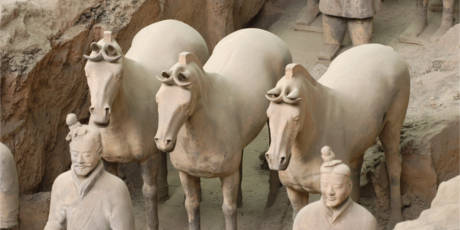 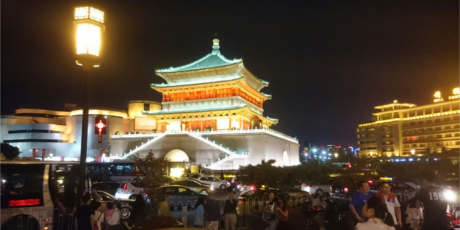 From the bus station on the Southern gate of the old town, there are local buses every ten minutes, directly to the Terracotta Army grounds. The fairs are paid in the bus and are a fraction of what you would spend using a taxi or even an illegal taxi, which should be therefore avoided. Also, the way back to town can be mastered very well this way.

It is assumed that, during the manufacturing process of the Terracotta Army (appr. 220 BC), the first mass production of human history has been developed. The reason for this assumption is, that these findings, weapons as well as armors, possess a high degree of similarity and quality that is only possible in standardized manufacturing processes.

Besides the Terracotta Army, there is another burial site – that of Emperor Han Jingdi (汉阳陵博物馆 Hànyáng líng bówùguǎn) – worth visiting. His burial grounds are also being guarded by thousands of clay soldiers, but these were manufactured in doll size (appr. 150 BC) instead of the life-sized Terracotta Army Soldiers.